Harvey Dam is located approximately 140km from Perth and offers reasonably good fishing for Rainbow and Brown trout as well as Redfin Perch. The dam is only open to fishing from September 1st to June 30th each year allowing time for the fish to recover from fishing pressure and also for the Trout to be restocked.

Harvey Dam fishing can be fantastic, particularly because it is stocked with Trout annually which makes this dam one of the better places for targeting Trout around South Western Australia.

The fishing spots in Harvey Dam can vary depending on winter rains and fish stocking. After the raining season the fish tend to congregate around in flowing streams and the trout tend to sit high in the water column. As the weather warms up and the Brooks stop flowing the Trout and Redfin can often spread throughout the dam and can be found hiding in most structure. However towards the back of the dam holds more structure and is generally the best place to fish.

Fishing from the shore for Trout and Redfin can be quite productive in Harvey Bay however be prepared to do some bush walking. Search for any running water, bugs and over hanging branches as well as the causeways are good places to start. The smaller Brooks are also good shore based fishing spots in Harvey Dam.

Using a kayak to fish Harvey Dam is the most productive way to find and catch fish in this dam. There are several launching spots that all give anglers quick access to good structure. During the warmer months trolling is an effective way to target Redfin that have schooled up in deep water.

Light tackle is best suited to Trout and Redfin – therefore bream gear with heavier leader around 10lb will be sufficient for Redfin in the snags. Lighter leader applies for Trout.

Lures of choice are any deep diving minnow lures, soft plastics and during the warmer months top surface lures. Redfin Perch are similar to the east coast Bass and will often smash big lures so don’t be afraid to cast and troll with larger deep diving lures. Trout prefer small profile lures and small soft plastics.

A freshwater licence is required by law and is available from a Post Office. The trout season goes from September 1st until April 30th. The south-west freshwater scene gives anglers a chance to experience something completely different to fishing in saltier metro waters. With places like Waroona dam at a bit over an hour’s drive from Perth, there’s no excuse not to get hooked on the sweetwater.

Share this with your mates. We hope you start catching a few fish at Harvey Dam!

Fish currently being caught in the South West region March, 2017 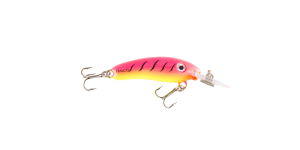 $12.99
Add to cart
Suited for some Fish Species.
Good for: Redfin Perch